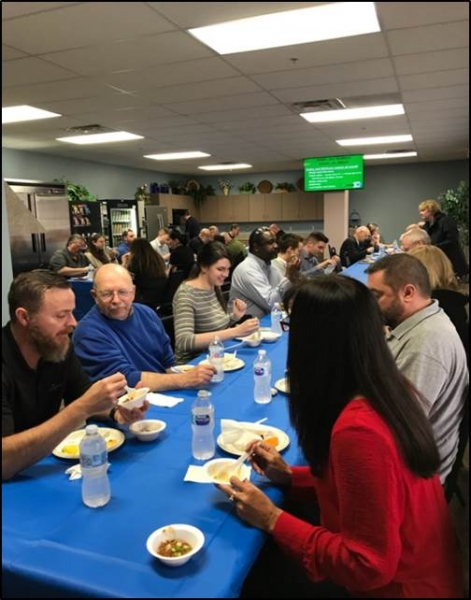 March 14 marked the 30th anniversary of the math-inspired holiday, Pi Day, and the Troy team celebrated by eating and throwing pies with proceeds benefitting Habitat for Humanity of Oakland County.

The Troy Birthday Committee in cooperation with People Helping the Underprivileged and Needy (PHUN) hosted the event which included two main components: a pie sale and a pie-in-the-face contest.

Several Troy-based leaders volunteered to receive a pie-to-the-face and the people who had the most money raised to their name were pied. A special thanks to those individuals who took a pie to the face in the name of charity, namely, Gerard Roose, Vice President of Sales & Marketing; Bill Dircks, Chief Financial Offer; Tad Magruder, Director, Roofs Product Line, North America; and Carl Siezckowski, Shipping & Receiving and Troy Facility Lead. You can view the video recap of the event here.

In the end, the team raised more than $1,000 for Habitat. Habitat for Humanity partners with people and communities all over the world to help build or improve homes for those in need. Habitat homeowners help build their own homes alongside volunteers and pay an affordable mortgage. Habitat helps homeowners achieve the strength, stability and independence they need to build a better life for themselves and for their families.